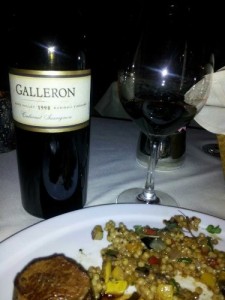 1998 Galleron Morisoli Vineyard Napa Valley Cabernet Sauvignon Opened this with dinner on a road trip to Laguna Beach.  Paired with Lamb Rib-eye and lamb shank prepared with a fig reduction sauce. Maureen had a forest mushroom and summer truffle risotto.  First off, this wine had problems.  It was over ripe and oxidized.  The nose was fairly bad but the body and palate of the wine was not as bad, which is strange.  Something that I need to say is that I got this out to drink about a half year ago and never put it back in the cellar, it sat in our house, in a laid down position.  We have a small wine rack near the kitchen that we keep things that we plan on drinking soon.  I'm saying this as a possible excuse for how this wine showed but to be honest, I have had wines that sat in that rack for 3 years that never showed poorly. Our home is typically in the low 70's and I don't think you should see this much of a problem from so little provocation, but ....... perhaps.  Anyways, this wine showed a ton of dark chocolate character along with strong rich cassis and black cherry fruit.  It showed a big ripe character, though the label said it was only 13.5% ABV, I suspect a much higher level.  It had lush tannins that seemed chewy and rich without being drying, the acidity was enough to carry the fruit but not distinguishable.  I think this wine had tremendous potential but whatever happened to it that caused the oxidation, kept it from showing it's true colors. It was still nice enough and we drank most of it but my rating as it was could only be about 88/100.