↓
Home Menu ↓
I'm going through a fairly drastic change here.  For those of you who have links to various pages and images on my site, I have removed most of them.   Over time, I may bring some of them back but I am changing the fundamental way that I am using the non-forum areas of the site.  I will stockpile some pages of information as time goes by but most of the content will be based on my personal blog information that will include information on food, drink, and travel. If there is an article or image that you would like to see come back, contact me and let me know. I will have a contact form built by the end of the day.
2003 Harrison Clark Santa Ynez Valley Syrah This has improved a lot since release.  Killer nose with a ton of roasted blackberry, espresso, tar, licorice, cocoa, full bodied but not over the top. Great structure, solid tannins with some slightly elevated acidity. One slightly strange thing going on, there seems to be a very small amount of residual sugar.  Absolutely no secondary fermentation going on in the bottle and the sugar was pretty much imperceptible on day two.  ??  Makes me wonder if they had some problems during production?? N 9 P 8+ C 8 S 8+ B 8- = 91+
2001 Belle Pente Estate Reserve Willamette Valley Oregon Pinot Noir Lightly colored with deep bricking around the edges.  Very aromatic, pretty and pleasing, sweet red cherries and raspberry, forest floor with pine resins and hints of earthy mushrooms, medium weight, 14.3% ABV, I can remember thinking this was a bit ripe in youth but I pick up no sense of that now, seems very nicely balanced.  Some mild tannins and slightly elevated acidity that makes the fruit seemed fresh and juicy.  Overall a very enjoyable Pinot in a good place but it should still have a few years to go. N 9 P 8+ C 8 B 8+ S 8+ = 92+/100
2010 Paul Lato Matinee Santa Barbara County Syrah Very smoky nose with hints of lees and French oak, tar and smoke throughout, nuttiness as well, fruit shows plum and blackberry, brown spice, moderate intensity, seems like a higher yield than his vineyard designates, not terribly complex but very well balanced.  Needs time, perhaps still a bit backwards, fairly savory.  Moderately structured. Smooth. N 8 P 8 C 8 B 8+ S 8+ = 91/100
2010 Paul Lato Hilliard Bruce Vineyard Belle de jour Santa Rita Hills Chardonnay Very tropical with a ton of pineapple, along with pear and apple, some brown spice, butterscotch and prevalent ginger spice.  Mild to moderate tannins and fairly crisp acidity.  Intensely flavored, nicely balanced and good length. Fruit is fairly forward but not over ripe.  Perhaps just a small bit of residual sugar.  Very nice wine.  N 9 P 8 B 9 S  8+ C 8 = 92+
2000 Venica Prime Note Colio Italy Not sure on the blend. It has Chardonnay, Tocai friullano and Sauvignon blanc from what I remember. Maybe some other obscure Italian grape that I can't pronounce. ??? Anyhow, I liked this a fair amount. Very savory, not much fruit left, a little guava, a little pear but full of a nutty diesel character with citrus zest and minerals. Medium full bodied with impressive balance. Those who are inclined to think wines are over the hill would undoubtedly say this wine was done, but I would scoff at them and drink their portion. It was even better on day two. N 8+ P 8+ B 9 S 8 C 9 = 93/100
2000 Chateau La Louviere Pessac-Leognan Graves Red Bordeaux Blend 64% Cabernet Sauvignon, 30% Merlot, 3% Cabernet Franc and 3% Petit Verdot. This is solid. Nose took awhile to show itself, compared to the Pride. Fair amount of cigar box, violets, black cherry, blackberry, currants, loamy earth, white pepper, medium to full body, deeply colored garnet, solidly structured with slightly drying tannins and moderate acidity. N 8+ P 8+ C 8 S 8+ B 8+ = 92/100
1998 Pride Mountain Vineyards Napa Valley Cabernet Sauvignon Best bottle of Pride I have ever consumed. Tannins are mostly resolved, acidity is still sticking out a bit but very nicely balanced, complex and smooooooth!! Tons of cigar box and cedar, black cherry, blackberry, currants, cocoa, some sage and thyme rich herbs, a little tar. Super aromatics. Served this with our rack of pork. N 9 P 8+ C 8+ B 9 S 8+ = 93/100 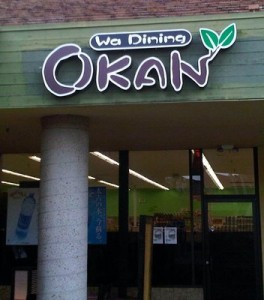 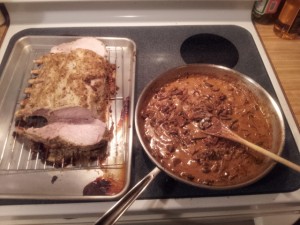 Maureen and I cooked a rack of pork for dinner that turned out spectacular. We picked up an 8 ribbed rack from Costco, which carries them during the winter holidays. They come fairly well trimmed, have an eighth of an inch wrap of fat that we were tempted to trim before cooking but opted to leave in order to use it to help baste the meat during cooking and keep it moist.     We made a rub from: 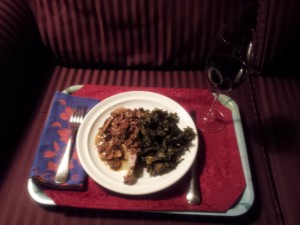 Dijon mustard lemon juice splash of white wine fresh Thyme garlic ancho paste green and red peppercorns. We cooked at 350º F, until the internal temp was 138º, pulled it out and let it sit for about 15 minutes or so, or until the internal temp reached 148º and then sliced off the first two ribs. The middle of the roast was perfectly cooked, white but very moist. There was a little pink on the darker part of the meat, but this was more the exterior sections of the meat so it did not worry me in the slightest. We made a saute of mushrooms, using: small shitakes king trumpets, (also called Eryngii) oysters chanterelles criminis I started out sauteing some pancetta. When that was browned up I added a bit more olive oil and then added the garlic along with shitakes and the trumpets because they are firmer in texture and need a bit more time to saute than the others. After a bit of time passed I added all the rest of the mushrooms, cooked them down a bit and then added a little chicken broth. When I got this all cooked down a fair amount, I added some fresh thyme and cooked that in.  I added some brandy until I had a solid flavor base of it in my mushrooms, then I started adding heavy cream. 2 thirds of a cup in all. Reduced that until it was thick, salt and peppered to taste. I made some kale chips prior to cooking the rack. That was dinner, we served it with a bottle of the 1998 Pride Cabernet Sauvignon, which was awesome. Pretty nice meal. I would highly recommend the rack of pork from Costco. The huge 8 rib rack which are just over $20. The chops are huge when you cut the ribs, much thicker than a rack of lamb chop.
Chatoe Rogue First Growth Dirtoir Black Lager Funny name but this stuff was pretty darn terrific. Darkest Lager I have ever seen. Thick oily texture. Loads of chocolate, roasted malts, coffee and caramel. Some earthy topsoil notes. Amazing that this stuff is only 5% ABV, I was guessing closer to 9% just based on the heaviness of thickness of this lager. It seems close to being over the top but then finishes with a fairly classic black lager character. A bit of a chameleon but I really enjoyed it. 4/5